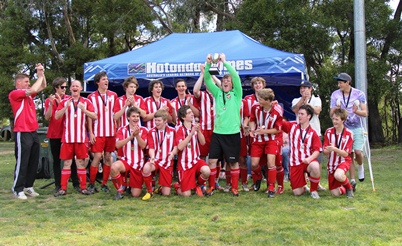 On Sunday the 15th of September, at the Drouin soccer grounds, the Trafalgar Victory FC Youth team made history by becoming the very first team at the club to win the final four series.  The club has had numerous league titles, most of which in recent seasons.  However, this was the first time the club has enjoyed the status of premiers.

The match started in controversy when Korumburra stated a “South Gippsland League” only player eligibility exemption.  The rule effectively allowed under 19 aged players to play in the final, despite having played the majority of the year in seniors.  This proved to be the undoing of Korumburra as it opened the door for TVFC to play key striker Matthew Steen.

The match started with neither team looking settled.  Ball movement was rushed and neither team displayed rhythm or indeed any resemblance of a game plan.  The backlines were on top for both teams and scoring opportunities were hard to find.

Half way through the first half and it was Trafalgar that broke through the defensive Korumburra line to score, courtesy of a strong run in to the box and quality conversion from Matthew Steen.  From this moment onwards the team looked to settle and gain some control in the middle of the pitch.

Despite a gain in confidence, it was Korumburra who then scored against the trend of play.  A corner kick was taken by Korumburra which was allowed to simply roll into the goal without any attempt to clear.  Goal keeper Josh Jones explained later that the ball was heading out and took a serious break off the pitch to bewilder the entire Trafalgar backline who were helpless to do anything other than watch the resultant goal.

With the game once again evenly balanced a superbly placed corner kick from Trafalgar’s Cameron Wyatt found Matthew Steen at the back of the box unmarked.  Steen simply placed the header past the goalie and the team went into the half time break 2-1. A lovely set play by the boys.

The half time address by coach Mark Wood was all the inspiration needed for the team to go out, control the match and bring home the silverware for the club.  The majority of the second half was a tug of war between the two teams.  However, it was Trafalgar generating most of the scoring opportunities the further the game went on.

Adam Brooker played a superb game in defence and repelled numerous attacks from the Korumburra team.  He was ably supported by seasoned campaigner Mark Edmondson and Brendan Shiells also.

Up front Rudy Garcia played a blinder and with the support of Aidan Mathews, the young strikers did a great job in keeping the ball in the attacking half of the pitch.  In doing so they also generated numerous shots on goal.

There is always that one moment that seals a final and in this match it was a run along the right wing by Brendan Shiells.  With his size 16 shoes motoring along the wing, “Flippers” as he is known by his team mates, took the ball half the length of the ground before drawing a foul in the box.  The resulting penalty was calmly converted by Matthew Steen in the final minutes of the match to secure the win and the premiership.  When the final whistle blew the Trafalgar faithful along the side of the pitch erupted in celebration and took to the pitch to celebrate the historic win.

It was a great day for the team and the club.  The vast majority of players in this team have all played juniors at Trafalgar and had not tasted the success associated with winning a premiership prior to this match.  Well done to all associated with the team.  The first League Champion & Premiers double in the clubs 18 year history.