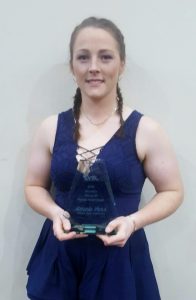 TVFC Senior Women’s star Amanda Hines has won the Latrobe Valley Soccer League’s inaugural “Player’s Player” title for the 2018 Season. For the first time in the league’s history players from every club allocated 3, 2, 1 votes for the player they believe was the best in the league.

The announcement of this award was warmly acknowledged by all present at LVSL’s Presentation Evening held at the Australian Italian Club on Friday the 19th of October. The TVFC representatives were confident that Amanda had was a genuine chance of winning the award. However, when her name was announced as the recipient there was still much excitement and surprise.

Amanda has come a long way from when she first started playing soccer at the age of seven on the back of the school oval.  Even then, she displayed good skill and a fierce determination for the contest. An attribute of her game that has never wavered.

Many current TVFC members may be surprised to learn that Amanda was as a junior a GSL (Gippsland Soccer League) representative goalkeeper.  She was strong, quick and extremely courageous.  She also kept for her Trafalgar junior team and made literally hundreds of saves a season for a team that conceded many goals.

Move forward to the present and Amanda is a strong, spectacular and extremely reliable player.  She is a natural midfielder who reads the game superbly and has an amazing bag of tricks.  However, Amanda can play up front as she has a deadly shot on goal or can be equally effective as a defender when an opposing striker needs to be kept in check.

Many at the club, including the TVFC Senior Women’s Coach, Tony Wyatt, have readily stated that she is the best player in the league.  Whilst others, like Life Member Mark Judd, claim she alone is worth the gate fee at Trafalgar.

“Hinesy” as she is known by her team mates is a much loved, respected and valued member of the TVFC Senior Women’s team. She is an excellent role model and ambassador for her club. for  A more deserving and popular recipient of this award would be hard to find.

All at Trafalgar Victory FC send their congratulations to Amanda, a most worthy winner of the 2018 LVSL Player’s Player.