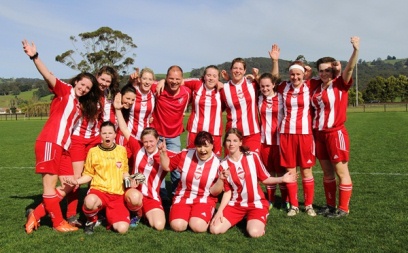 It took until the final round of the South Gippsland League season for the Trafalgar Victory FC Women’s team to claim the title of “League Champions”.  Not that anyone at the club minded, rather all associated with the ladies team are ecstatic with the result.

Leading into the match the ladies were on equal points with the team from Phillip Island, however the Trafalgar girls held a commanding seven goal goal-difference.  A margin in the end that Phillip Island couldn’t reel in.

The Trafalgar team looked right at home back playing on the wide open spaces of the Trafalgar soccer grounds.  The drive generated by the two wing backs in Codey and Jaiden was phenomenal.  Both girls owned their respective wings, making numerous runs and providing great attack to their team.  The saying that the “best form of defence is attack” has never been better illustrated.  Jaiden played like a woman possessed and it was indeed show time for all to see.  Whilst Codey scored the goal of the day with a 40m bomb from near the half way line.

The dependable core of Trafalgar players once again delivering their regular contributions.  Shirley made every pass a winner and controlled play in the middle and Danelle dominated play from the back of the pitch setting up plays time after time.  Amanda ran her typical half marathon and provided plenty of options up front as she has done all season long.  Caycee played a typically strong game and ensured her Leongatha opponent remembered every challenge.  Whilst Grainne played like a women who would do anything to ensure the title was Trafalgar’s

In fact, there wasn’t a girl in the red and white stripes who didn’t play their part.  This was one of the best team games played by the girls, in a season that highlighted Trafalgar’s even spread across the park.

After 80 minutes of sustained and relentless pressure the Trafalgar team squeezed the life out of their Leongatha opponents and with a comfortable 3-0 score line, held their nerve to take out the match and indeed the league title.

Following a confirming phone call to Phillip Island, where the score read a 2-0 victory to the home team, the joy was obvious for all to see and the celebrations commenced pitch side.  Whilst the girls were understandably delighted, the win provided a great deal of satisfaction to coach Warren Steen.

Warren took over the role as coach last season and proceeded to implement a possession based and structure orientated change to the TVFC Women’s game plan.  Change is never easy and it took a little whole for Warren style of play to become familiar to the players.  However, the team of 2013 fully embraced his game plan and the rest they say is history.  The win is Warren’s first at the club after 10 years of coaching and is great reward for his tireless services to the club which far exceed his role as team coach.

It was only in 2010 that Trafalgar Victory FC first entered a women’s soccer team.  The only remaining players from that inaugural year are Caycee Tatterson and Jaiden Jarvis.  Today it is great to see players like Codey and Caitlin enjoy success having been with the club for many years now.  It has also been delightful to see so many new players join the team over the journey and enrich the team and indeed club during the year.

All at Trafalgar Victory FC congratulate the newly crowned League Champions and wish them the best for the upcoming final four series.