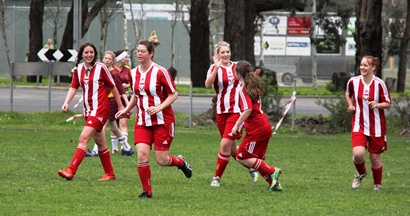 With only one round remaining in the 2013 South Gippsland’s Senior Women’s division, both Trafalgar Victory FC and Phillip Island SC stand alone on top of the ladder, both with 31 points apiece.  Following today’s convincing 4-0 win to Trafalgar over Drouin, the Victory enjoy a goal advantage of seven goals over their island based opponents.

The Trafalgar girls started the weekend in second place, however they finished it in first as a result of their win and Phillip Island’s bye during this round.  Which means now it all comes down to the final round, where Trafalgar Victory play fourth placed Leongatha Knights and Phillip Island plays seventh placed Drouin Dragons.  In the event that both top two teams win, it will come down to goal difference.  So to make sure of the title, the Trafalgar girls need to win and win well in their final round of the season.

If this weekend’s match against Drouin is any gauge to measure the teams form, then the girls should approach the game with plenty of confidence.  Whilst there are always aspects of the game to work on, the ladies broke the scoring shackles of past weeks and hit the back of the net consistently throughout the match.

Jaiden and Codey dominated their wings and provided plenty of drive for their teams.  Both girls ran the match out well and showed amazing poise and determination on the ball. Casey attacked the game full on and won plenty contested ball in the middle of the park also.

Up front the team had plenty of avenues to goal.  Grainne, Caitlyn, Amanda, Jo and Danelle all took shots on goal and each looked dangerous in the box.  This week it was Jo who scored twice as well as Danelle and Caitlyn who each scored one goal apiece. Caitlyn’s goal was scored with only a handful of seconds left on the clock, a very timely effort.

Grainne ran herself into the ground and was relentless in the pressure applied to the Drouin midfield.  Shirley once again made every pass count and continues to find a team mate whenever she has possession.  Vanessa was a brick wall in defence and rebounded numerous attacking advances by the Drouin girls.

With a half time score of 2-0 to Trafalgar and a final score of 4-0 it was an impressive performance by the girls, who played the entire game without a sub and worked very hard for their win.

All at the club wish the girls the very best for next week.  Coach Steen will be sure to keep the focus upon the last game to ensure the girls perform well against Leongatha next weekend.

For pictures from this weekend’s game simply click on the following link:https://tvfc.com.au/?page_id=2521