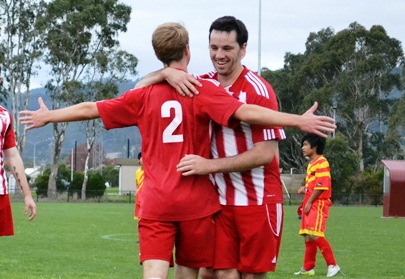 The Trafalgar Victory FC Under 19 team have taken out the South Gippsland Youth League title in its inaugural season with a commanding 5-1 victory over Korumburra City SC on a wet and very cold Thursday night.

Tonight’s result sees Trafalgar eight points ahead of second placed Mirboo North with only two rounds of the home and away season remaining.  Their lead is insurmountable and guarantees the team of the division title.  The win gave Trafalgar Victory its first title in the South Gippsland League, a feat it hopes to repeat in the Senior Women’s division in the next fortnight.

The match started poorly for the Victory who conceded the opening goal to Korumburra in the opening minutes of the match.  However, a blinding first half by TVFC striker Matthew Steen witnessed the deficit quickly being erased and a healthy lead established by half time.

Steen’s speed, agility and finishing skills entertained the crowd, delighted his team mates and left the Korumburra defence bewildered.  In a thirty minute blitz Steen scored three goals and appeared to have the ball on a string.  A superb run by Adam Brooker late in the half, where he simply muscled his way into the box and finished clinically, capped off an outstanding first half. The half time score was TVFC 4 – KCSC 1.

The half time advice from the Trafalgar coaching trust was simple; “Keep the ball on the ground, control the play and win the half”.  The instruction was carried out to a word and young striker Cameron Wyatt added a further goal to the score sheet when he calmly finished a nice pass with the outside of his left foot.

There were numerous contributors on the night.  Mid fielder Ash Klemke played an excellent game providing great ball for his team mates and gaolie “Hot Dog” set up several goals via superb long bomb goal kicks.  Adam Brooker controlled the middle of the park whilst Matt Hartell generated some great run from the backline.  An excellent team performance across the park.

The TVFC team controlled the match from early in the first half to the final whistle.  They thoroughly deserved the win and the title for that matter.  The Youth team is the prime reason the club moved to the South League, as it offers a pathway for players of ages 17-19.  Accordingly the entire club is delighted for all players associated with this team.  All at TVFC congratulate them upon their success and wish them the best for the upcoming finals series.