TVFC Under 11s Round 16 Report 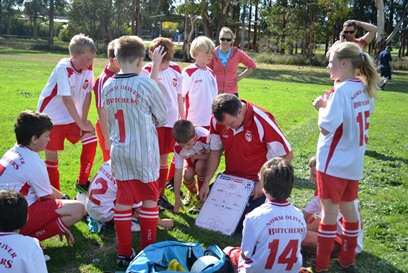 The TVFC Under 11 team finished their season with an impressive and improved performance against Fortuna Black.  Despite not winning the game the team demonstrated just how much the team has improved during the 2013 season.

In the first half of the match the team kicked two goals.  The first came from the boot of Michael from a deflected corner kick and the second from Josh following a good sequence of play.  However the speed and skill of the indigenous Fortuna forwards was a little too much for the Trafalgar defensive unit to handle and they conceded four goals in the first half.

Ben Turra worked extremely hard for the entire game and gave his team every opportunity throughout the day.  Haylea and Rhys also made numerous runs up and back along the wings.  Goal keeper Alex made some good saves and was right in the middle of the action when a penalty was awarded for Haylea’s “handy work” in defence.  He read the kick correctly and only just missed making a miraculous save.

In the second half Haylea took the gloves from Alex and was at her acrobatic best, making numerous spectacular saves.  Flynn and Ewan were released up front, whilst Josh and Michael took their turn in the backline.  Trafalgar’s only goal for the half came from Ewan following a great pass from Flynn to set up the goal.  Ewan looked delighted with his efforts and his celebration was only matched by that of his father, who was also stoked with the goal.

Towards the end of the match, Fearghus fired up and made a hat trick of successive tackles.  He received a huge round of applause from the appreciative Trafalgar parents. Then, only minutes before the end of the match, Alex found himself shooting at goal one on one with the keeper.  It would have been great reward for a lad who has improved considerably during the season.  However, his shot was a little skewed and missed tom the right.

At the end of the game the score was 7-3 in favour of Fortuna, who was probably the better team on the day.  However, it was clear that the difference between the two teams is narrowing and that the best the Trafalgar team has to offer is good enough to score against any team in Gippsland.

As coach of the team I am extremely proud of the development of this group and am delighted with both the involvement and support offered by parents.  There has always been someone to help with the goal setup, training, canteen or uniform washing.  This assistance is really appreciated and made the season so much easier.

I look forward to seeing you all at the Junior Presentation in September and back playing again in season 2014.