TVFC Under 11s Round 15 Report 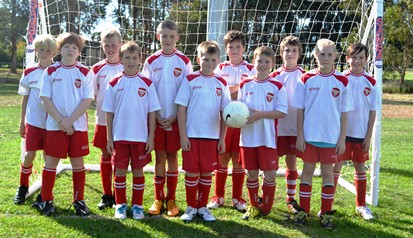 In the second last match of the season the Trafalgar Victory FC Under 11s played at home against Morwell Falcons.  The match commenced with the Trafalgar team having the vast majority of the play, yet failing to score in the opening minutes of the game .

The Trafalgar midfield were in total control early on and the teams “quarter back” Ben Turra was directing play and setting up both Rhys and Flynn along the wings.  Both boys in turn provided great supply to Michael and Josh up front who were proving to be quite a handfull for the opposition.

It wasn’t long before the Trafalgar team eventually scored and by half time they enjoyed a comfortable 3-1 lead.  One of the first half highlights was a low and hard struck goal from Ben.  On the odd occasion that Falcons made it past half way, Haylea, Tristan and Drew quickly repelled the ball to their midfield.

In the second half it was a similar story with the Trafalgar team moving the ball well as they transitioned from defence into attack.  On one occasion Rhys won the ball on the wing, passed it to Michael who drilled a left footed pass to Josh who went on to score.  There was some really impressive ball movement from several of the Trafalgar team members.

Haylea moved into the midfield and provided considerable run and determination along the wing.  Whilst, Ewan defended grandly and turned defence into attack on many occasions.  The team once again scored 3 goals in this half and it was Josh who scored the bulk of the goals for the match.  He shared the ball well and made great position all day.  On several occasions it was only the goal frame that denied him from scoring many more goals.

It was only late in the second half that the team let through some very cheap goals and gave the Falcons team a little respectability on the scoreboard.  At the sounding of the final whistle it was Trafalgar 6 – Falcons 4 (although the kids for Falcons would have you believe otherwise). Well done to Alex, who played in goals all day and did his very best.

Special acknowledgements and thankyou to Ewan and Drew who both played a half each for Falcons who were one player short.  Although, I not sure if Drew understood where his loyalties lay when he scored against Trafalgar in the second half (nice goal Drew!).

Thanks also to Wayne for officiating his first match.  He did a great job and looked very comfortable as the match referee.

This weeks awards were as follows;