Victory Too Good For Knights 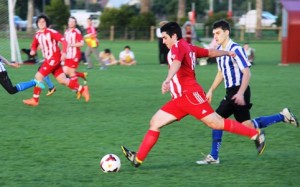 Trafalgar Victory played the Leongatha Knights at Trafalgar for their Round 7 match.  Both the men’s and women’s teams were desperate to take the points having lost to Drouin in the previous round.  Once again the youth team did not play, due to the fact that Leongatha failed to enter a team this season.

The women’s match was an open and free flowing game, with Trafalgar dominating play.  Their opposition, who only had the minimum seven players on the ground, struggled but played with a great deal of determination.

The Trafalgar ladies had so much time on the ball and so many options at their disposal it was like a training drill at times.  One of the most pleasing aspects of the match was the passing in front of goal and selfless team play.  Some of the creativity shown by Jo and Jaiden was superb and their passing of the highest quality.

Coach Warren took advantage of the numerical advantage and tried a few positional changes throughout the match.  The forward line had a new look with both Shirley and Angie playing up front for a significant period of the match.  Both girls had shots on goal.  Shirley was denied only by the cross bar, whilst Angie celebrated with her team mates after scoring her maiden goal for the season.

The big talking point of the match was the “bizarre” decision made by the referee who failed to call a goal that crossed the line by over a meter.  Whether it was his failing sight or the fact he made the call form the centre circle, no one will ever know.  The fact that the Leongatha goalie was standing a meter behind the goal line with the ball in her hands still wasn’t enough evidence to convince the match official of the score.

All in all, it was a good win for the girls and some experimental opportunities for the coach.  Trafalgar 6 Leongatha 0.

In the men’s match there were even numbers with an 11 V 11 game.  But that’s where the balanced nature of the game stopped.  Trafalgar, who were missing numerous players due to injury, had control of general play from the first minute of the game to the last.

The midfield were well on top, with Dylan winning plenty of the ball and setting up the strikers with numerous opportunities.  Striker Brian was used in a defensive role this week and played a very serviceable game.  He proved to be most dependable in this role and provided quality supply to the midfield.  His only blemish for the day was a defensive header that made keeper Devin work hard to deny an own goal.

Sam also played a superb game generating a lot of run and drive along the right wing.  His vertical leap and explosive pace is a treat for spectators from both camps and a real asset to the team.  With only one of the bench Coach Greg had no alternative but to play and whilst he would not have been delighted with the way the team finished in front of goal, he would have thoroughly enjoyed being on the park with the lads.

One of the highlights of the day came when Aiden was brought into the game.  He made a long run after a heavily weighted pass which was collected by the Leongatha keeper.  When attempting to pull up, Aiden lost his balance and fell heavily on top of the keeper.  Despite the heavy clash the keeper got to his feet smiling and realised there was no malice in Aiden’s challenge. The referee however, wasn’t as forgiving as he reached for his cards and enjoyed the theatrics that was to follow.  The end result was that one of the club’s most passive members was in the book with a yellow card.

The Trafalgar team dominated play, yet were quite wasteful up front .  There were obvious chances to set team mates up in the box that were ignored and numerous off side mistakes that just shouldn’t happen at this level of football.  With some good decision making up front the Trafalgar boys could have scored a further 5 goals in the second half alone.   Assistant coach Mark put it well when he stated that “the boys just need to train together more”.  The final score was Trafalgar 2 Leongatha 0.

At the end of the day both the men’s and women’s teams each took the available three points.  Both teams are within striking distance of the league title and have the capacity to beat anyone on their day.  An entertaining day’s football was had by all.