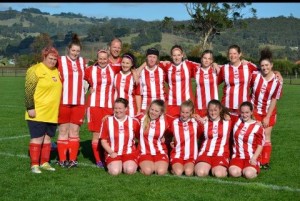 The Trafalgar Victory Womens team started their season with a home game against Phillip Island, a team they were unable to defeat last season. Phillip Island jumped out of the blocks and scored very quickly after the start of the game. Trafalgar then slowly got into the game and were able to put pressure onto the Phillip Island defence. Amanda Hines provided great drive down the right wing and created numerous opportunities for Jo, Caitlyn and Haylee.

After a period of sustained pressure Jo was able to put the ball in the back of the net to level the scores. Phillip Island again broke through to take the lead before Amanda slammed the ball against the crossbar. The half time score saw Trafalgar down 1:2 but the feeling was that we were right in the game as Phillip Island had no subs on their bench.

It took about 20 minutes after restart for Jo to score her second to level the game. Trafalgar was definitely starting to control the play and Caitlyn, Christy and Britt shut down most Phillip Island attacks. Anything that did get through was easily stopped by Bekk and the introduction of Jaiden into the game meant the Phillip Island defence had much more to worry about. Her hard work allowed Jo to score goal 3 and then Jaiden also hit the cross bar.

The final goal came from Jaidens kick rebounding off a Phillip Island defender to make the final score a 4:2 win to Trafalgar. It was a good start to the season and after next weeks bye we look forward to another home game against Korumburra on May 11. The team would like to say thank you to Templar for acting as the club referee on the day.