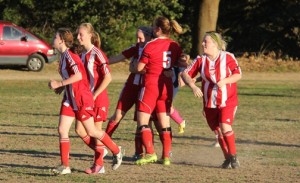 Trafalgar Victory played Drouin Dragons at Drouin in their Round 6 South Gippsland Soccer League clash.  The match held particular significance, with both teams sitting first and second upon the league ladder.

The first half was literally owned by Trafalgar, with the girls in red and white dominating possession and playing the vast majority of the match in their attacking half of the pitch.  On the odd occasion when Drouin did make an attacking run the Hines sisters and Caitlin Mathews had the back line well in control.  Amanda Hines was particularly dominant on her defensive wing and appeared to have the ball on a string.

The middle of the park was being well controlled by the Victory.  Jo who was busy racking up possession after possession and offered great supply to her team mates.  Shirley played her ever reliable game which included her trade mark accurate short passing game. Whilst Jaiden played a blinder of a first half and simply carved her way through the Drouin midfield and defensive lines.

Up front Amanda Steen continued to make very threatening runs into the Drouin box.  There was some beautiful passing in the first half with Jaiden and Haylee generating much run and ball movement along the wings.  Both strikers looked dangerous and threaten to score on numerous occasions.  The best opportunity for the half came when Jaiden broke through the middle of the park, drew a Drouin opponent before releasing Amanda one on one with the Drouin keeper, only to be denied by what could be best described as a “questionable” club referee offside call.

Despite being in complete control of the game, the Trafalgar girls failed to find the back of the net.  At the end of the first half it was Trafalgar 0 Drouin 0.

For the first fifteen minutes of the second half the match followed the trend of the first half, with Trafalgar looking very comfortable with the match.  Then against the run of play Drouin made a strong counter attack with good numbers on the ball.  It took only a quick 20 meter kick out of the pack to bring the match to life.  Drouin had found the net and lead 1-0.

To Drouin’s credit they never gave up when challenged and they kept working hard.  The goal seemed to bring the Drouin girls to life and they certainly were “up and about”.  As a result the game lifted a notch and the contest rose to the next level.  The Trafalgar girls weren’t about to concede defeat and players like Brittany and Haylee worked exceptionally well, as did Jessica who tried her heart out for the entire game.

It was a nail biting match with both teams desperate for the next goal.  Trafalgar to keep the game alive and Drouin to seal the 3 points.  Spectators and players alike were feeling the pinch.  The steady and controlled playing style of the first half was replaced by frantic ball movement and desperate long passes.  Unfortunately for the Trafalgar faithful it was Drouin who again scored and secured top stop upon the ladder.

At the end of the game it was a 2-0 victory to Drouin.  The game was most entertaining and the Trafalgar ladies can only lament the missed opportunities of the first half. The girls gave their best, yet came up short on the day.   Whilst it is still early in the season and the race for league champions is wide open, one can’t help feel an opportunity was lost in this game.  The Trafalgar team and their loyal supporters look forward to next week’s match with the intention of claiming another three points.