TVFC Under 12s Round 8 Match Report 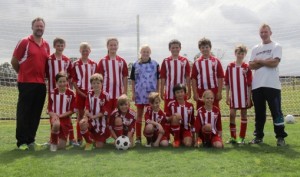 Trafalgar Victory played Traralgon City in their Round 8 Central Gippsland Soccer League match.  The setting was superb with the match being played under sunshine upon Trafalgar’s magnificent pitches surrounded by a 360 degree scenic view.

The Traralgon team were fast, skilful and very well organised and it was clear for all to see why they are atop the GSL ladder.  Whilst the visiting team scored seven goals for the match, five of which in the first half, it was the improvement of the Trafalgar team that was the true story of the day (from a slightly biased opinion).

The Under 12 team has seven players new to the club this season.  Effectively half of the team have never played together prior to this year and indeed some are playing soccer for the first time.  With each passing match the team looks more balanced and players more confident in their team mate’s game style.

The backline, lead by today’s captain fantastic Nic, played a much more accountable and organised brand of football.  Nic lead by example and proved to be a real leader in the team.  As sweeper he directed his fellow back men and encouraged all to “step up” when it was time to do so.  He was ably supported by the likes of Jaynie, Tristan and Jackson.

Jaynie makes the game look so simple with accurate kicking, smart decision making and good positioning on the ground.  She continues to improve week after week and is becoming a most reliable member of the team.  Tristan was back this week after an extended period of injury.  His experience in the back half was welcomed and he made numerous clearing kicks throughout the day.  Jackson, whilst not a nominated backline player, played an excellent match in defence winning tackles and foiling numerous attacking runs.  Not only does he defend well, but he intelligently sets up plays to his awaiting midfield time after time.

In the midfield this week was the reliable firm of Ben, Michael, Haylea and Rhys.  All experienced and all dependable.  Ben never lets his team down and is one of the most reliable players at the club.  He reads the play two steps ahead and always gets to a challenge.  He never puts in a bad game and refuses to be beaten.  Michael is back to enjoying his football once again and is setting up forward moves with delightful passing.  His control on the ball is exceptional and his switch of play makes him a very dangerous player indeed.  Rhys and Haylea always give their best on the wings.  Both thrive upon taking an opponent on and playing into open space.  Both are good kicks of the ball on either feet and serve their team mates every week.  The dangerous duo were forced to work hard this week, but both played serviceable matches.

This season has also witnessed the discovery of an additional midfielder in Jacob.  Jacob is elusive, impossible to beat and a speedster along the wings.  He has the ability to operate in almost no space at all and is a pleasure to watch as he weaves his magic along the wing.  Another fine match Jacob

Up front the team is very well served by Josh who manages to score a couple of goals a week on average.  When not scoring goals himself, Josh is passing the ball to team mates to try and beat the opposition defence.  This week Jackson, Kate and Connor also played time in attack and each had their changes in front of the goals.  Jackson had the best opportunity of the day when he found himself one on one with the City keeper.  Unfortunately he pushed the ball wide, but the passing leading up to the shot was superb and Jackson’s timed run most impressive.

Luke played the entire game in goals.  Whilst the Traralgon forwards did find the net on several occasions, Luke made some amazing saves and has shown considerable development in only a matter of weeks when last he kept goals against Moe.  Luke is prepared to come off his line, to attack the ball and to take the ball off his opponent’s feet.  He is as skilful as he is courageous and played an outstanding match.  Drew, who was absent today, will have to train the house down to get the goalie gloved off Luke.

The second half demonstrated just how much the team has improved.  Against the best team in the competition the defensive team conceded only twice and had at least three good changes to score of their own.  A most impressive effort from an improving team that promises so much for the second half of the season.

This week’s awards went to; Tristan, Jacob and Nic