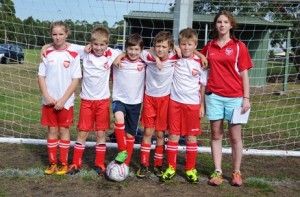 Trafalgar U11’s versed Tyers for their first game of 2014 at Yallaun North.  From the moment the whistle sounded Traf was in top formation and ready to strike.

Pass after pass from one Traf player to another filled the pitch and the amount of teamwork the kids displayed was astronomical. In the first five minutes of the game, the under nines team from last year faded before my very eyes and transformed into a stronger,  smarter and more confident functioning team.

Working together, Harry and Georgia continously kept the ball away from our teams goalie (Roan) and accurately passed it to a team mate in midfield every single time. Campbell and Bella worked overtime as they relentlessly hunted down the ball from all over the field and sent it sailing up to Mark and Riley who were running rings around the other teams defenders.

Traf led the scoreboard at half time with 3-0 .

Second half held a few changes with Harry after his spectacular performance in the first half now in goals, Roan in midfield and Mark (after scoring an astonishing three goals already) was placed in defence.

Fresh from the break and bursting with eagerness to score again, the team played with a determination I had never seen before.

Georgia, a born defender, was reading the play before it even happened and smashing the ball out of the back line straight up to star player Campbell who made some outstanding decisions and between him and Riley, they managed to score two more goals.

Not to be outdone, Mark made a run from the half way line, dribbled around four defenders and slotted the ball into the top right hand corner.  Riley baffled the opposition with his fancy footwork all game while brave little Bella plowed straight through them. Roan spent the entirety of the second half being in the best positions possible, playing the game smart and setting up his teammates for outstanding passes and shots on goal. He was awarded the Star of the game award for a job well done.

When the whistle sounded for the end of the game the final score was 6-1, Trafs way.

It was an amazing start to the season. The team work and skill shown today was incredible and I for one, have never been more proud in my entire life!

Big thanks to Drew Murphy for reffing the game.