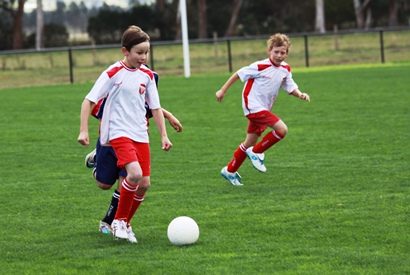 A cold, yet mostly fine, Saturday morning greeted Trafalgar players as they arrived at Warragul’s junior soccer grounds.  In a bizarre fixturing twist, the Under 11 team played the same opposition twice in two weeks.

The first half was a relatively evenly played period, with both teams scoring.  Trafalgar were to hit the score board first courtesy of a delightful cross in the box from Josh who set up Michael for a clinical conversion.

Despite the early goal, the Trafalgar kids didn’t look switched on and made several uncharacteristic mistakes.  The first touch was off, players held the ball a little too long and passes consistently missed their targets. At half time Trafalgar faced a 2-1 deficit.

After a chat at the half time break the TVFC chargers looked focussed and ready to play the game on their terms.  The difference was noticeable form the onset of the half.  The team found width across the ground via Haylea and Rhys and the delivery from the middle of the ground was superb from Ben.

Josh was soon to score and looked threatening up front for the entire half.  The defensive team looked settled and the ball was cleared by central defender Tristan on numerous occasions.  On one particular play, Tristan cleared the ball with a 20 m header.  The best defensive header ever seen at TVFC SSF.

The team converted well from corners with both Josh a Rhys scoring deep in the box in front of goal.  The second half was a much more impressive showing form the entire team and proved that the team has the ability to lift their game when asked to do so.

Drew and Ewan both played well along the defensive wings and provided plenty of run along the wing as well as quality ball supply for their mid fielders.  Fearghus and Alex both took their turn in goals and both did a good job wearing the gloves.  Both boys also did their part when playing on the pitch also.

Awards for this week were as follows;