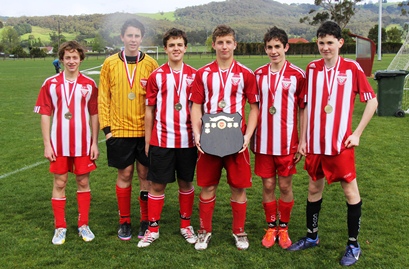 The 2013 TVFC 5-A-Side Tournament has been run and won for another year.  Despite artic conditions, the players, officials and volunteers soldiered on to complete a thoroughly enjoyable day of exciting football.

The event, which is now in its sixth consecutive year, had team entries from far and wide.  Teams from Pakenham, Inverloch, Churchill, Warragul, Moe and Sale all took part in what is fast becoming an end of season ritual for many clubs.

At the conclusion of the round robin stage of the tournament the four top placed teams from each division played off in their respective semi-finals.  The results were as follows;

Just as the finals commenced the heavens once again opened and the biggest down pour of the day was unleashed upon the event.  When the rain eventually cleared, the magnificent TVFC grounds remained in perfect condition and play commenced.

In the men’s final it was highly fancied new comers “Scotland” who maintained their unbeaten record for the day, winning convincingly against a gallant and very talented “Lavalla Old Boys” team boasting the likes of Stephen Maselli, Matt Maselli and Joel Pirotta.

In the women’s final it was Churchill who continued on their winning way against and extremely enthusiastic and energetic South Coast Stars unit. The Stars played their heart out yet couldn’t match it on the scoreboard against a young and very talented Churchill team.  Mary Corponi was dominant for Churchill whilst the “Scorpion” was superb for the Stars in goals.

In the intermediate final Trafalgar Victory FC was well represented by members of its Under 15 team.  The TVFC U15s team, ably lead by local star Jacob Vitale, gained an early lead and ran out comfortable winner against Manchester Country, despite conceding a second goal in the final minutes of the match.  Coach Klemke was yet again “screamed out”, yet very satisfied by his chargers efforts throughout the day.

The TVFC organising committee wish to thank the players, referees, club volunteers and local supporters for making the event such a success.  Congratulations to this year’s new entrants and eventual title winners.  We trust all teams enjoyed the event and are keen to partake in next year’s tournament.