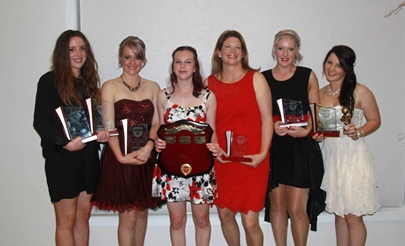 The 2103 TVFC Senior Presentation was held at The Black Tie on Friday the 20th of September. Whilst the attendance was down slightly on last year, the crowd was jovial and enjoyed an excellent evening of awards and dancing.

The format of the evening consisted of a three course meal, numerous awards and the recognition of the contributions made throughout the season by numerous volunteers.  Both the senior and junior club person award recipients were announced and the league winning Women’s and Youth teams were presented with their medallions.

It was an excellent evening for the club and both the management of the Black Tie and the event organisers were suitable impressed with how the event unfolded.

The awards presented were as follows;

Trafalgar Victory FC would like to thank all the senior players for their support and participation throughout the season.  The club hopes to see you all involved in 2014.