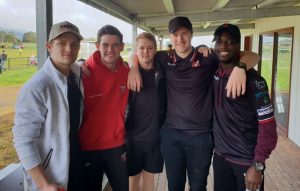 Those who have been involved with local community sporting clubs know only too well that “Volunteers are the backbone” of any such organisation. There are so many jobs to get done within a sporting club whether it be a cricket club, bowls club, equestrian club, gold club, footy club, netball club, tennis club or a soccer club.

As such, Trafalgar Victory is just like every other club in the local community. Training sessions, game days and special events all take time and effort to plan and carry out. TVFC has had an excellent group of volunteers for nearly 25 years now. The jobs range from canteen management, cleaning, coaching, team managing, meeting delegates, planning groups, grant writers, political advocates, media editors, player recruitment, events organisers etc. The list is endless.

Most volunteers are adults who either play at the club or who have children or a partner at the club. Traditionally, those with a direct connection through family are often the first to roll their sleeves up and have a go as volunteers.  However,  one of the most impressive group of volunteers are those young players, many of who are still at school, who are willing to give back to their club.

2018 Junior Club Person of the Year, Chloe Alison, is one one such volunteer.  Chloe plays as a keeper in the Senior Women’s team, yet is at every game day throughout the season working in the canteen with her mother making sure there is sufficient food for all at the grounds. When most of her team mates are packed up for the day, Chloe is assisting in the canteen cleaning and packing up the kitchen.  She does this with little recognition and received only the odd message of thanks or gratitude. Indeed a great club member.

This weekend another group of high school aged players made a significant contribution to their club. Players Josh Porter, Logan Winter, Hamish Brace, Monte Rahama & Stuart Beckley each gave up their Saturday morning “sleep-ins” and officiated as match leaders at the club’s MiniRoos Gala Day from 9:00am – 11:00am. Each lad refereed an Under 8s and Under 10s match across the morning session. The benefits to volunteers are numerous, whilst benefits to the club are also substantial. It is the classic “win – win” scenario.

Thank you so much to all the generous volunteers at Trafalgar Victory FC, but especially to those boys who joined the list of those at our club who are prepared to make a contribution for the betterment of our great club.