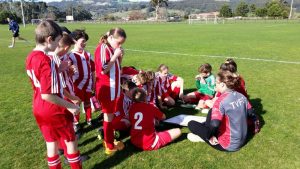 Trafalgar Victory Under 12s continued their current winning streak with a solid performance against Tyers Gold at Trafalgar today. After a very even first half, the scores were locked at 1 all. Trafalgar then came home very strongly in the second half scoring an additional 3 goals to seal the win 4 – 1.

Once again it was a great effort by all of the kids. Trafalgar played particularly good soccer in the second half where they combined brilliantly as a team. Some excellent passing by the whole team setup many shots on goal. The Trafalgar defence were particularly awesome in the second half, when Tyers found it virtually impossible to get a shot on goal.

Special mention goes to goal keeper Yelan who made one of the saves of the season in the first half. His big dive to his right with an outstretched hand prevented an otherwise certain goal. Well done Yelan and great game Traf!