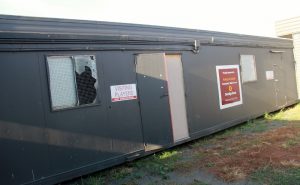 The Latrobe Valley Soccer League Board has advised Trafalgar Victory FC “that they are reviewing the ongoing viability of TVFC hosting home games for the 2019 season due to the inadequate facilities currently on offer at TVFC”.

The LVSL Board further added that they had “received numerous letters of concern from other member clubs in the league who are continually frustrated at the lack of appropriate change rooms and shower facilities as required in the LVSL/FV facilities regulations “. The action taken by the LVSL places TVFC in a perilous position as it approaches the commencement of the 2019 season in only a few weeks.

In response, the Trafalgar Football and Netball Club have very generously offered their change room facilities for the upcoming season, when their fixture permits. The situation highlights the urgent need for a new change room facility.

Back on the 6th of June 2018, TVFC forwarded three budget submissions to Baw Baw Shire Council.  The first being $90K towards the completion of match lighting at the soccer grounds. BBSC has since successfully secured funding for this project via the Victorian State Government’s “The World Game Facilities Fund” program.

The second submission request was for $120K for the hire of a temporary and portable change room and shower block to be used as an interim arrangement, prior to the availability of a permanent change room and shower facility. Unfortunately, this was not approved for the BBSC 2018-2019 budget and accordingly TVFC now finds itself in its current situation.

The third submission was for a $200K contribution towards the construction of a multipurpose change room/shower facility.  This submission resulted in BBSC adding $100K to their 2018-19 budget for the planning of a new change room facility at the Trafalgar Recreation Precinct.

Currently the BBSC Recreation Department are undertaking a review of the Trafalgar Recreation Precinct master plan.  Part of which involved a review of the precincts priorities for 2019 and beyond.  Thankfully, all stakeholders at the TRP have signed a document stating that the fore mentioned change rooms, second cricket oval and a water bore are the three top priorities for the TRP. This document was presented to BBSC representatives on the 22nd of October, 2018 at the TRP Master Plan Review.

Whilst BBSC is following a strategic and criteria based process, which promises the delivery a good outcome for the Trafalgar community, it is TVFC’s concern that inquiries regarding both state and federal funding need to occur simultaneously as the TRP is being reviewed.

As it currently stands, the BBSC TRP master plan review is scheduled for completion in June of 2019.  At which point it is hoped that a multipurpose change room design will be completed, catering for Trafalgar Victory FC, Gippsland FC, Trafalgar Cricket Club, Trafalgar Junior Football Club and the Trafalgar Boxing Club.

However, by the time of the proposed completion of this review, the Victorian State Government deadline for Victorian Sport and Recreation grants for 2019-2020 will have passed, thereby pushing the potential construction of this desperately needed facility back a further twelve months.  This is an unacceptable position for tenants at the TRP, especially Trafalgar Victory FC, Gippsland FC and the Trafalgar Boxing Club.

Conversations held between TVFC and BBSC back in December 2018 indicated that little to no progress had been made in sourcing funding for this project, despite promises of such. TVFC implore BBSC to commence investigating funding options for this desperately needed project. It is simply not satisfactory to build a soccer ground without the provision of a change room and shower facility.

TVFC President, Lachlan Wyatt, explained “without an adequate shower/ change facility, the club is continually left clutching at straws when trying to develop social relationships with our members and guests”.  He further added “without suitable amenities at our grounds we face the likelihood of being unable to host games, thereby losing thousands of dollars in income throughout the year”.

To date, Trafalgar Victory FC has met with BBSC councilors, the Latrobe Valley Authority, Football Victoria, State politicians and the Trafalgar and District Community Bank to discuss funding options.  The LVA have expressed interest in funding such a project and the TDCB has confirmed its support in writing of such a project.  The Sporting and Recreation Victoria  funding options include the Female Friendly Facilities Fund, Community Sports Infrastructure Fund and The World Game Facilities Fund.  There is significant funding available.  However, the time for funding applications is now, not 12 months down the track.

Trafalgar Victory has done all in its power to promote the needs of the community.  It has worked with other tenants at the TRP to provide an outcome that is beneficial to all stakeholders. It has established and presented several funding options for BBSC to further investigate and it has utilized every avenue available to plead its case. Baw Baw Shire Council, please find the funding for this much needed project.  Waiting until the end of the TRP review is no longer a viable option.