TVFC members Tanya Makins & Mick Byrne attended the Trafalgar High School on Tuesday 12th March along with FV Ambassador Mark Cassar to run a Football Session with some of the Year 8 & 9 students.  We had a strong turn out on the day with 13 girls and 10 boys attending.

We took the students through a number of drills at the start of the session which then progressed into a game.  The students were split into 4 mixed teams where they rotated through playing against each other for a period of time and then Mark changed the teams to all boys and all girls teams to get the students playing against their own gender.

We closed the session with Mark playing Simon Says with the students which tripped a lot of them up and were penalised by doing 3 star jumps.  On conclusion of the session we addressed the students where Mick provided information about the club and how we would love to get some junior teams together to enter the LVSL competition.

The feedback at the end of the session was that the students all enjoyed themselves and were going to tell their friends to come and sign up for the next 3 sessions so hopefully we will see bigger numbers next week. 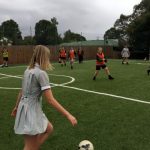 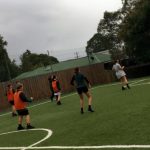 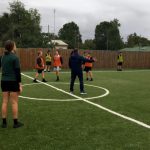 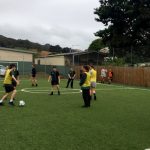 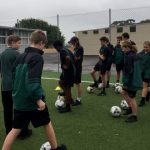