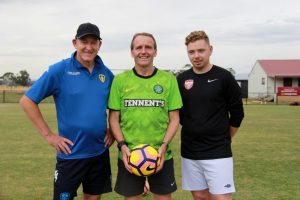 Trafalgar Victory FC is pleased to announce its senior coaching team for season 2019.

Christopher Beasley (Senior Men’s Assistant Coach) is new to the coaching team at Trafalgar and comes with recent state league experience having played at both Morwell Pegasus (State 1) and Peninsula Strikers (State 2).  Christopher is a Trafalgar resident and has played at the club, both as a junior and senior player. His strong connection with the playing group will make for an effective leadership style.

Tony Wyatt (Senior women’s Coach) has signed on for his fifth season at the helm of the senior women’s team. His coaching and leadership has forged our women’s team into a most competitive and united squad.  Having won the LVSL’s 2018 Senior Women’s Coach of the Year,Tony is a much appreciated and valued member at our club.

The TVFC committee is delighted with its 2019 coaching appointments.  The club has considerable confidence in the coaching team and wish each the best for the season ahead.

NB: Preseaon has already commenced at Trafalgar Victory FC.  New and returning players are most welcome to attend.  Training sessions are held of Tuesdays and Thursdays from 6:30 tom 8:00pm.