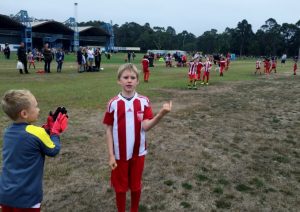 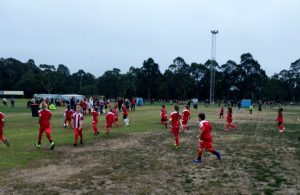 Our first game for the season was at Falcons and all of the kids were really excited to be playing.  We had a fantastic turn out so much so that we have enough to make 2 teams now which is fantastic to see more kids participating this season.  Luke, Aidan, Zander and JJ went and helped out Moe on the other pitch as they were short some players which gave our kids an opportunity to have more game time.

Both teams played 9 on the pitch which gave all of the kids more game time.  TVFC started off strongly and all of the kids were getting involved.  Lillian and Ivy were very strong in defence with Xavier in goals for the first half making a couple of nice saves.  Jack and Oliver were causing havoc up front which resulted in a couple of goals for TVFC.  Moe hit back with 1 goal before half time.

After some much deserved oranges at half time the kids were eager to get back out there and continue playing.  With some changes in positioning Bryn, John and Quinn played back in defense allowing Lillian to go up front and Ivy to go into goals where she made some great saves.  Kade and Xavier were chasing the ball through the middle with Jack, Oliver and Arlo playing forward.  Lillian went into goals halfway through the second half and made some terrific saves as well denying Moe from scoring in the second half.  We scored again in the second half and all of the kids played really well for their first game together.