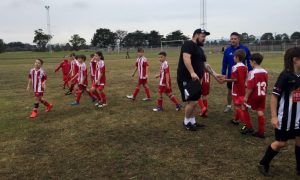 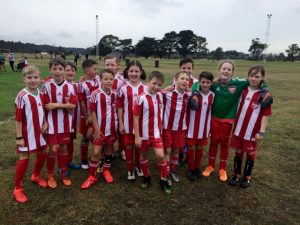 Our first game for the season was at Falcons and we had a great turn out of kids eager to play.  With 8 players on the bench we were in a situation where we had to sub a whole team on and off every 5 minutes so everyone got game time.  This is a fantastic result for the club as we can now enter a second team and it means we have more kids participating this year than last year which is really great to see.

TVFC started off with Lee giving the players their positions to play.  This will be a big learning curve for the kids coming up from U8s however the first game showed that they all seemed to handle their roles really well.  Jaxon played in goals for the first half making some nice saves however TCSC did get a couple of goals against us.

After some much deserved oranges at half time Lee made some changes to the team and the kids were back out playing again.  Jett, Sulley, Ryan and Cohan were all making some great plays up front and had a couple of chances of scoring but unfortunately the TCSC keeper saved them.  Mitch and Oscar were creating some great opportunities for our forwards to score with some nice runs and passes.  Our defense was stronger in the second half with Felicity doing a lot of work denying TCSC any chance of scoring along with Blake and Jaxon.  Stella played in goals for the second half and did a great job.  Tyler, Harvey and Maddie were doing some great work through the middle and Kaiden, Onyx, Loghan and Liam were all contributing as well.  It was great to see all of the kids getting involved in the game and getting a kick.