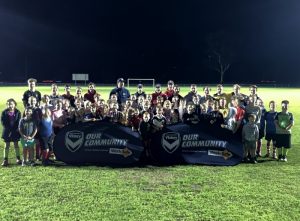 Thomy and Argyle visit a lot of sporting schools and clubs to deliver their community based soccer clinics. They also assist in coaching and running match day events within the community.  Their visit to Trafalgar would have resulted in a long day’s work for both gents who reside in Eastern Melbourne. Argyle explained that “We do a lot of work with clubs as well as schools, clubs operate after hours so a lot of that work stretch into the night.”

The focus of the session was getting the kids to have an understanding of working into space and moving the ball at a quicker pace than they usually do at the junior level.  Argyle put it nicely when he said that the session was about “Building skills and knowledge that they can take away and keep doing in future training sessions.”  He further added that the goal was to “Keep the sessions quite simple, yet teaching them things they haven’t learnt before.”

Both Thomy and Argyle said the kids were great and the activities kept them busy and continually moving. The guys certainly engaged the kids and delivered an active, skill based session.  A special thank you goes out to the TVFC coaches who also assisted in the delivery of the program.

At the end of the club training session a group picture was taken, MVFC water bottles were handed out and a meal was shared by the entire club.  It was a great evening and one the club would like to repeat in seasons to come.

Thanks again to Thomy and Argyle form Melbourne Victory FC for running the program.  A huge thanks to Tanya for organising this excellent event and to Katrina, Raelene, Mick and others who helped with the preparation and serving of dinner.

Yet another example of how Trafalgar Victory FC are delivering a quality football experience to its members.