Under 12s Round 7 Match Review

It took seven rounds to get their first win, but with a 9-2 win against NYUSC the TVFC Under 12s showed how far they have come in a short time. 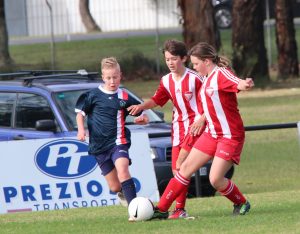 In round 1, the under 12s lost 11-0 to a strong East Gippsland team. It was a tough introduction to junior soccer and the first time the entire team had played on a full size pitch. For much of preseason the team had practiced individual fundamental skills, however with the commencement of games the focus has shifted to team structure and player roles. To the team’s credit, all players in the team have committed to working hard and making sure they improve with each game. As a result, the gameplay each Saturday has clearly improved and the team has provided the opposition with some tough competition.

Which brings us to our round 7 match against NYUSC. Pre-game, energy was high and the team was keen to start. This week’s captain was Mieke, who won the toss and elected to take the kick-off – a great decision, as the ball was quickly pushed deep into the NYUSC half and stayed there for the majority of the first 15 minutes. The starting TVFC mid-field of Zane, Riley, Yelan and Braeden did a fantastic jobs of pressuring the opposition and keeping the ball boxed in the NYUSC half. 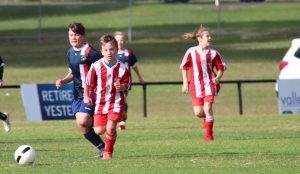 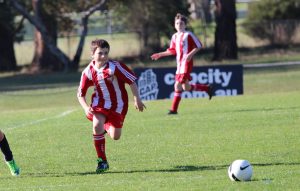 Alekslandr was proving to be too hard to contain and with a number of outstanding runs was able to cut through the defence and kick two first half goals. With a two goal lead, substitions were made. Trafalgar continued to play well, Kyen demonstrated some excellent vision, and brought team mates into the game with great passes. Lola showing her talent as a throw-in specialist, providing opportunity for the team to run the ball down the side line.

Mackenzie and Beau ran hard in the midfield shutting down opposition counter-attacks. Defenders Aaron, Harry, Logan, Mieke and Ava were excellent. By working together as a unit and co-ordinating their back four structure, they ensured keeper James had very little to do in the first half. Logan was also especially effective in providing options off the many corners won by the team. 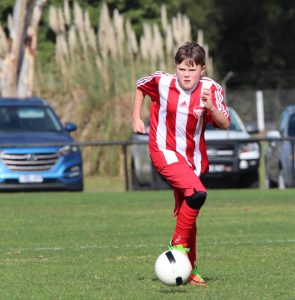 TVFC finished the first half with a 2-0 lead. In the second half, James moved from GK to forward along with Braeden and their combined running speed proved too much to handle. With the opposition clearly fatigued, mid-fielders Zane, Yelan and Riley continued to move the ball to the strikers at speed and to their credit, the strikers finished the job. In the second half Braeden scored 3 goals (plus a shot that forced the keeper in scoring an own-goal), James scored 2 goals and Zane scored 1.

While many of the goals demonstrated some excellent finishing, the highlight of the game (at least for me) was a play the started by Yelan winning the ball on the left side. While dribbling the ball he lifted his head, saw Braeden and played an excellent pass. Braeden then beat his defender and could have taken a contested shot but instead, squared the ball to an open James inside the penalty area. James trapped the ball and calmly placed the ball wide of the keeper into the back of the net. This passage of play really demonstrated the player’s growth and ability to take the drills practiced at training and apply them match day. 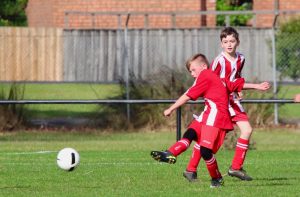 Congratulations to our Under 12 team and a great reward for all your efforts! 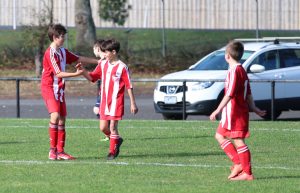 Thanks to Paul Connolly for the excellent photos!