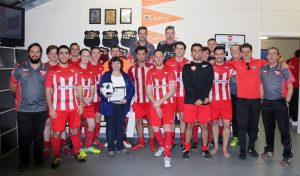 The men’s squad travelled out to Crinigan road this weekend for a battle with a high in spirit Fortuna.

The TVFC reserves began the game on the back foot with a number of key players unavailable leading to a last minute call up to the under the weather veteran Templar Hankinson and a rare call into goals for Senior striker Aidan Wyatt.

The lads started on the backfoot with 10 men on the field for the start of the game. After condeding early the boys began to fight their way into the game. After a string of brilliant saves from fill in keeper Wyatt, the young guns of TVFC combined. Josh Porter gathered the ball at centre back and went on a half field run beating several Fortuna defenders before releasing Logan Winter into the box, where Logan slotted the ball between the keepers legs for his 3rd goal in as many weeks.

Unfortunatly the game was downhill from there as Fortuna gathered themselves in the second half producing some great football despite a resilient defence. Fortuna, the Reserves league champions, ran out 6-1 winners on the day.

On the back of a brilliant performance against Moe in round 19 the Senior group looked to continue their momentum. With a strong line-up named the boys went into the game filled with confidence. A late call up for Monty Coots- a TVFC junior graduate was a nice touch before the match. The game started as tense affair with both teams battling for control. TVFC tested the Fortuna defence with brothers Dylan and Aidan Wyatt both going close to breaking the deadlock. Despite a number of chances TVFC couldn’t find the net until the 40th minute when superstar striker Nathaniel Paredes took the ball in trademark fashion, beating his defender and slotting the ball in the far bottom corner. TVFC went into the break with a 1-0 lead.

From kick off in the second half it was evident Fortuna knew they had to battle to maintain a chance at making the top 6 finals. But it was Traf who struck next. After some great build up play Monty Coots got on the end of a low cross to put TVFC up 2-0. There were great scenes with the whole team joining Monty in celebration of his first goal in adult football with his last strike coming in the under 14’s. Fortuna managed to get a goal back before Joshua Paredes showed his class by beating his defender and rounding the keeper and slotting the ball to give TVFC a 2 goal buffer with 3 minutes left. Fortuna tried to get back into the game and scored a late consolation but it was the TVFC boys who ran out victors.