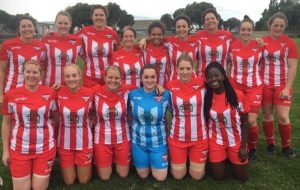 On Sunday the 6th May, Trafalgar Senior grades headed to Churchill for what was expected to be three very winnable games.

Womens:
The women’s won extremely comfortable with a 7-0 thumping over the opposition. Amanda Hines scored a brace with Molly Ewin and Hannah Bonnuci also scoring two each.
Danelle Van Boven scored the opening goal with a beautiful tackle on the Churchill defender and then smashed the ball from left side of the 18-yard-box into the right top corner with her left foot.
Molly Ewin scored two great goals, one of which smashed into the bottom corner, hitting the inside of the post making it impossible for the keeper.
Cristiin Melbourne was outstanding on the day providing a wonderful free kick into the box for Amanda Hines to run in and finish with style.
Emily Keilty provided some fantastic defensive skills on the day to keep Churchill very quiet.
Hannah Bonnuci once again proved why she’s one of the best strikers in her age group and in the league with two great goals.
As a collective, the Women played incredibly well and proved to the league that they’re a force to be reckoned with.

Trafalgar Reserves team followed up the women’s with a 2-0 win over Churchill. Coach Eamon O’Hare changed the teams slightly by putting young, talented striker Logan Winter in the centre of midfield with ex-Churchill player Oliver Tait. The pair linked up really well providing plenty of crucial passes to strikers Rudy Garcia and Brian Farmer.
A penalty late in the first half was won by Rudy Garcia and Logan Winter provided the finish from the spot.
In the second half Trafalgar won a corner which provided an assist for Brian Farmer to finish it into the back of the net to make it 2-0.

Seniors:
Trafalgar Seniors were confident enough in a win with Chris Gratton and young defender Josh Porter in centre back.
The first goal came from a penalty won by Nathaniel Paredes and finished by his older brother, Josh. Unfortunately, Trafalgar conceded later on in the half, but then quickly bounced back with a brilliant team goal finished by Nathaniel Paredes again.
The next goal came from Churchill with some sloppy defending by the Trafalgar Men. But we didn’t lose our heads and scored a third goal again by Nathaniel. A lovely finish with his left food after cutting in on the 6-yard-box and putting it far bottom corner. The fourth goal came from yet again, Nathaniel Paredes. This goal got him his hatrick.
The ball was turned over from Churchill which landed at Nate’s feet. He noticed the keeper off his line and chipped him from 25-yards out.
The final result was 4-2 Trafalgar Victory’s way. A great result from all 3 sides.
Bring on Moe United next week!