TVFC Change Rooms on the Agenda 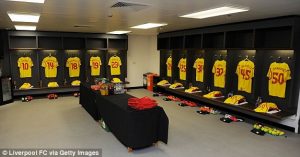 The Trafalgar Victory FC Committee have activated plans towards securing funding for a new Change room/toilet facility.  Every player, official or supporter who has been at the Trafalgar Soccer Grounds  since its opening in 2012 have made comment on two observations:

The lack of change rooms is, and has been stated by past and present councillors, as “an absolute disgrace”.  How a ground that services Trafalgar Victory FC (160 players, 40 of whom are female) and Gippsland FC (100 players, 25 of whom are female) exists without an operational change rooms is beyond comprehension.  Every weekend of the season, players are travelling from as far as Melbourne, Sale and Bairnsdale only to make the long journey home wet and dirty at the end of a soccer match.  This is not acceptable.

Such a lack of facilities is failing to meet the Rules of Competition as outlined by both the Latrobe Valley Soccer League and Football Federation Victoria. This is a basic requirement of all clubs to its players and opposition players. It has been 6 years since the grounds have opened and a solution to this issue is well overdue.

Trafalgar Victory FC have commenced initial conversations with the relevant government bodies and will be doing everything in its power to see this project come to fruition.  From outside of the club it may appear to some that little work has been done by the club to address the current situation.  Accordingly I wish to summarise the actions that have taken in recent times:

Clearly the the TVFC Committee of management are actively pursuing funding for this project.  In addition to the club’s strategical approach there has been considerable support within the local community.  Local community members have written to both state and federal members to demand action on this project.  Local media outlets WIN TV and Gippsland FM have both promoted and supported this cause.  The LVSL and Gippsland FC have both initiated conversations with local political representatives to see this much need project put on the agenda with the local government.

From this point forward TVFC  is looking to seek additional support from all levels of government in the region. It plans to make a budget submission for BBSC to consider before adopting the budget.  Most importantly TVFC will endeavor to have this project identified as a BBSC priority and placed upon the shire’s Master Plan.  If this could be achieved, then there is a much clearer pathway for local government, the LVA and TVFC to move forward to a successful and satisfactory outcome. There is considerable work to be done.  However, with some vision and strong leadership at all levels of decision making, this essential project could be delivered in a timely manner.