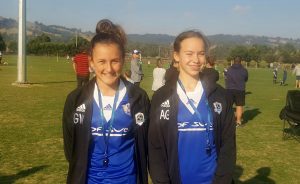 Trafalgar girls Allyssa Giles and Georgia Wyntjes have both played their first matches for Gippsland FC as members of the GFC Under 16 Girls team.  Allyssa has been playing soccer since she was nine years old as a member of the TVFC Under 13 Girls only team.  Whilst Georgia has been playing for the past three years at Moe United SC.

The girls have both found the pace of soccer played as a member of Gippsland FC faster and the training more serious.  Allyssa stated that “you can’t muck around at training and the sessions are way more intense than at regular club level” and Georgia added that “The coaches are much more honest in the feedback they give their players”.

When questioned about what advice they would offer to other girls wanting to play soccer at a high level? Both Allyssa and Georgia recommended that the girls join their local club and work really hard on their basic skills. It was really pleasing to hear both girls encourage others to “get into soccer, as we need more girls playing the game”.

Both Allyssa and Georgia are members of the Gippsland FC Under 16 Girls team and are both bottom age, being only 14 years of age.  They have both left the relative comfort and familiarity of their own clubs and had to get to know another group of people in their new team.  Despite this, both girls are glad they made the choice to challenge themselves and both are great examples to other young girls playing at Trafalgar Victory FC.  Allyssa and Georgia are great examples of what determination and dedication can deliver.

All in the local soccer community wish these two Trafalgar girls the very best for their season ahead and indeed their soccer dreams of the future.