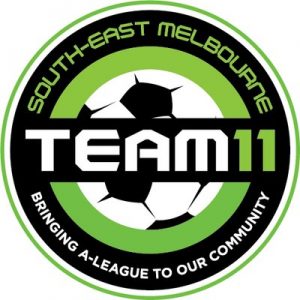 Many of our members would be aware that the A-League is looking to expand its current competition from 10 teams to 12 teams in the 2019/2020 season.  Accordingly, there are numerous applications being submitted around Australia from both existing and new clubs wishing to join the nation’s top level of competition.

One such bid is coming from “Team 11” who are proposing a new identity to be based in the south-east of Melbourne. The Team 11 Steering Committee (comprising representatives from the City of Greater Dandenong, City of Casey and Cardinia Shire Council)  is working to bring the A-League / W-League to south east Melbourne due to the broad range of benefits it will provide to the community, in particular local football clubs and participants.

The newly appointed  Team 11 Project Officer, Matt Windley, tonight held an information session at the Trafalgar Victory FC club rooms for representatives of the LVSL and GLS. Matt was a well respected and highly credentialed football journalist for the Herald Sun. He is well informed on movements within both domestic and national football and is an extremely passionate advocate for the Team 11 bid.

Matt’s presentation outlined the Team 11 bid and highlighted the proposed training base at Casey Fields and a new stadium at Dandenong. Matt explained how Team 11 is looking to grow support from grass root clubs such as Trafalgar Victory FC.  He explained how Team 11 wished to identify itself not only with the South East of Melbourne, but with Gippsland also. His presentation was most informative and left those present with plenty to think about.

If you would like to know more about Team 11 and how you can support their bid, then please check the following links: