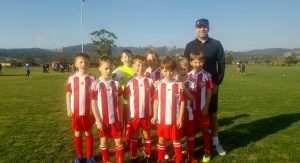 For the first game of the season it was a very excited group of players that arrived early for the TVFC under 8 Mini Roos, we had eight enthusiastic players who were keen to put their pre-season training into practice on the field. For many of the team it was their first experience of organised sport and you could see the enjoyment of just pulling on the jersey for the first time. TVFC got off to a nervous start but soon got into the game with some neat passing and dribbling, Cohen and Rylee did a tremendous amount of running to make things very hard for the opposition and it did not take long for them to score a few quick goals. Felicity and Arlo were solid in defense and Tyler was in the middle with some great tackles. Onyx and Liam took turns up front and kept the NYUSC defense busy.

We got to half time with only conceding one goal and scoring seven but more importantly TVFC were working hard and enjoying their football. After some well-deserved oranges at half time, the second half was more of the same from TVFC, Anton was looking after defensive duties and the opposition found it hard to get past him. NYUSC did finish with a late surge scoring a couple of late goals and the TVFC Under 8s lost a bit of concentration and were distracted by a low flying ultra-light that buzzed the ground for some time.

A big thank you to Anton who showed some leadership and put his hand up for goalkeeping duties in the first half, with Tyler and Felicity sharing the gloves in the second half and they all did a fantastic job. The final score was 13-3 to TVSC, Cohen picked up the award as he scored most of the goals and worked very hard, Anton also picked up an award for his great work in goals and his effort on field. I was very pleased with the effort and enthusiasm shown by all and how they played as a team and enjoyed themselves.