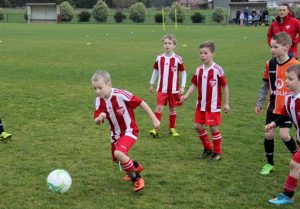 It was quite a mild morning before the start of U8s home game but during the first half the wind kicked up making it very cold. The TVFC kids dealt with the cold by doing lots of running to keep warm. We did a lot of attacking in the first half with Tyler, Harvey and Onyx playing up front whilst Cohen, Riley and Quinn played in the backline. Jack was playing in the midfield doing lots of running and getting his boot to the ball a number of times. Felicity was in goals in the first half and saved some sure goals. We managed to break through Fortunas defence which enabled Onyx and Cohen to score. Fortuna hit back with a goal of their own.

After eating some well deserved oranges at half time TVFC were back on the park for the second half. We swapped positions again so those that played forward in the first half played in defence in the second half and vice versa.  Onyx went into goals and saved some nice attempts from Fortuna.  Riley scored 2 beautiful goals and Cohen added another to his repertoire.  End result was a well deserved win to TVFC. Well done kids.