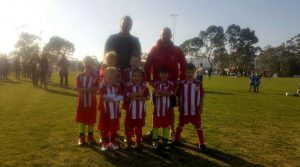 We were very lucky again this weekend with a beautiful sunny morning at Newborough Soccer ground with 8 of our 9 U6s ready to play.  The players were very enthusiastic during their warm up with Adrien and couldn’t wait to get started.  We began the game with 4 players on the field as Newborough were short on players.  Halfway through the first half Xavier pulled on a NYUSC strip so that we could get more players on the park.  It took a little while for the kids to warm up but once we got going TVFC couldn’t be stopped.  Kade scored 2 goals in the first half with Grace and John attacking the ball and showing real tenacity.  Ivy and Lillian were yet again doing a great job in defence keeping NYUSC goalless.

After some much earned oranges at half time we started the second half strong with 4 more goals hitting the back of the net, 1 each from Lillian and John and 2 more from Kade.  Piper and Buckley where showing real focus and grew in confidence this week.  They followed the ball and had a number of kicks which was great to see.  Xavier, who was still playing for NYUSC showed great leadership and was turning the ball around towards his goals just like we have been working on during training.  Mick did a great job on the field getting TVFC into position and encouraging them throughout the game.

Yet again Grace showed plenty of determination in the second half chasing and kicking the ball which earned her the BK’s Award and John was awarded the Jump & Climb for his great effort around the pitch.  I would like to thank Xavier for stepping up and playing for the opposition, well done Xav.