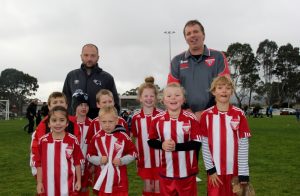 It was a bit of a slow start for our first game of the morning as the conditions were quite chilly.  Once the kids warmed up they began to play some great football.  Our determination to chase the ball finally resulted in Kade kicking our first goal.  After recharging at half time with some oranges and watermelon the kids got back onto the part for the second half.  The U6s showed great improvement in the second half chasing the ball down and kicking it towards our goals resulted in another two goals, one from Grace and one from Lillian from the halfway line.  Our defence was very strong thanks to Ivy and Lillian keeping Fortuna goalless for the entire game.

This was the first time we had played Falcons all season so we weren’t sure what to expect.  Falcons started off very strongly and were very physical but our kids stepped it up and matched them.  Grace was again in everything in the second game, running, tackling and dribbling the ball.  She made a break and almost got a goal when the Falcons player got there and pushed her off the ball.  It was a great effort and she was very unlucky not to get a free kick.  Xavier was tackling and kicking the ball with great skill and accuracy in game 2.  Over the past few weeks Xavier’s game has improved immensely.  In normal John fashion he was everywhere tackling and dribbling at every opportunity.  John has been a very consistent contributor throughout the season.

Buckley was also contributing with some great kicking all thanks to the direction of super coach Mick.  Buckley’s confidence and skill level has grown a lot over the season, especially after he kicked 2 goals a couple of weeks ago.  Kade got a couple of opportunities to take the Falcons players on and got it down to our goals but unfortunately the Falcons defence was too strong.  Kade also has improved a lot during the season consistently kicking a number of goals for us this season.  As always Ivy was very strong in defence and was doing some fantastic saves of her own in the backline which would have been sure goals.  Ivy is a natural defender and has shown this every week.  Lillian as always was running around everywhere playing sweeper and kept sending the ball back towards our goals, something she does week in and week out.  Lillian has a very strong kick and has been improving her accuracy each week.

Overall Mick and I are very proud of the U6s and what they have achieved this year.  The level of improvement we have seen in each and every one of them is very rewarding to see as a coach and we only hope that they will all come back next year and play for TVFC again.  It would be fantastic to keep this group together as they are a great bunch of kids and Mick and I have enjoyed coaching them immensely.

We would also like to take this opportunity to thank the parents, grandparents and other family members and friends that have come along and supported the kids throughout the season and have supported us by helping out whether it’s with fruit & lollies, laundry, canteen duty, setting & packing up the grounds along with a lot of other things.  It definitely makes our jobs easier as coaches so thank you very much.  We have enjoyed coaching your children this year and are looking forward to the season ahead in 2018.  We hope to see you all back next year.  Please enjoy your break and stay safe.