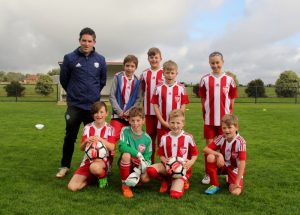 With Lee being away this week Stacey and Tanya took up the reins of coaching the U10s.  Stacey started the U10s off showing them all their positions on the whiteboard.  Having no subs this week meant everyone had to work really hard on the ground.  With Jai in goals (as he wasn’t feeling well), Wesley, Ryan O, Mitch and Kaiden played back and they were all kept very busy against an attacking Traralgon City team.  TCSC were pushing our midfielders and defenders to the limit in the first half.  Trafalgar had a few opportunities to push the ball up where Jett, Sulli and Ryan D worked well together to get the ball into our forward line towards goal however the TCSC defence was very strong and denied us scoring in the first half.  Our defenders also did a great job keeping TCSC goalless at half time

The direction was given at half time for the defenders to push back towards the half way line when Jai had the ball in goals so he had some space to kick the ball out to the forward line.  This worked really well and slowed TCSC’s opportunities to intercept the ball and bring it back down towards their goals.  Having said that, when the ball did get down to their forward line Jai made some terrific saves and Wesley and Kaiden were doing some great defending clearing the ball whenever they got the opportunity.  Mitch swapped into midfield in the second half where he was doing a great job moving the ball forward along with Ash which gave our forwards more opportunities to score.  Ryan D, Sulli & Jett were all doing a lot of work in the forward line and had some nice shots at goal but unfortunately we couldn’t find the back of the net.  All players played extremely well and it was a good result to come away with a draw against a very strong TCSC team.