Under 10s & Under 16s Combined Training 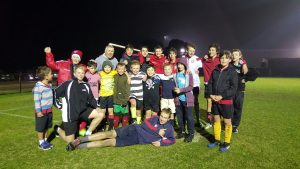 The TVFC Under 10s and Under 16s held a combined training session on Thursday the 8th of June.  The Under 16 Boys team took advantage of the upcoming weekend off to have a bit of fun at training and get to know the Under 10 team.  The Under 16 lads assisted in the training session which focused upon “1v1” and all were happy to demonstrate their skills to the younger boys.  Both teams enjoyed the change to the weekly routine and the younger players certainly took up the opportunity to take on their more senior counterparts.  The session finished with a scratch match between the two age groups.  Coaches Mark Judd and Shirley Guthrie were delighted with how the evening unfolded  and are looking to repeat the session again later in the season. It was a most positive outcome and one that proved beneficial to both groups of players.