TVFC Under 16 Boys Round 2 Report 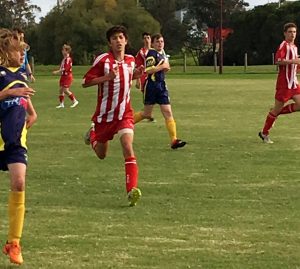 The TVFC Under 16 Boys escaped the cold and wet climate of the Latrobe Valley and travelled to the relative warmth of East Gippsland this weekend.

After an extremely promising start to the 2017 season, which resulted in a comprehensive 6-0 win against Sale in Round 1, the TVFC lads were keep to experience that “winning feeling” against East Gippsland United in Round 2.

The match wasn’t exactly going to plan when EGUFC chipped keeper Josh Rothmeier in only the fourth minute of the day.  However, when key striker Logan Winter returned the favour to the EGUFC keeper only one minute later, the match was back on an even keel.

The EGUFC forwards were making run after run at the TVFC defence.  Central defenders Stuart Beckley and Lachlan Smith worked overtime to deny their opponents a second first half goal.  Wing defenders Josh Porter and Lachlan Burke also defended grandly to ensure no additional goals were conceded in the first half.

Having endured the original EGUFC onslaught, the TVFC midfielders started generating some forward advances of their own.  Toby Budd was getting plenty of the ball in the centre of the pitch, whilst Michael Judd on the left and Hamish Brace on the right provided great service to their respective wingers.

The match moved from being played in the defensive half of the pitch for Trafalgar, into a genuine full pitch contest.  The Trafalgar strikers were entering their attacking box with all three, Nic Tammes, Logan Winter and Calum Stewart, looking likely to score.

Once again, it was the instinctive and very talented Logan Winter who dismantled the EGUFC backline.  In a six minute blitz which was built upon consistent effort of the midfield and the support of fellow strikers, Logan managed to score not once but twice to give Trafalgar a commanding 3-1 lead at half time. His balance and evasiveness make Logan a defender’s nightmare.

At half time the boys from Trafalgar were quite buoyant, yet focussed.  Coach Mark urged his chargers to mentally reset the score line to 0-0.  He asked his players to win the second half.

The second half was jam packed with individual and team highlights. There were numerous shots on goal, players going down in the box and some desperate defending as well.  Josh Porter became the second scorer for Trafalgar when he converted an impressive solo run at the fiftieth minute mark much to his delight and that of the Trafalgar supporters.

Michael Judd put forward his nomination for the “Oh so close” shot on goal, when he spectacularly volleyed a near perfect corner ball from Calum Stewart.  The ball went from corner to striker and past the next in a matter of seconds, never touching the ground. Top quality play all-round.

Jacob Holmes once again had the ball on a string and entertained all with his array of magical moves.  Whilst second gamer Kaiden Kondo worked exceptionally hard in the midfield.  Kai is an excellent athlete who is proving to be an extremely fast learner of the game.  At one point in the match Kai stripped the ball from his opponent, made a 30 meter run up the wing and finished with a perfect cross into the box on his left foot.  He is definitely one to watch as the season progresses.

The defensive unit, lead by keeper Josh Rothmeier and now joined by the fast and physical Michael Wallace, were now fully on top.  The game was being played on Trafalgar’s terms and the ball passing was “on the deck”, just the way Coach Mark likes it. With only 10 minutes remaining, up popped Logan Winter one last time to score the team’s fifth and final goal of the match for Trafalgar.

An impressive game by all the boys.  Some great team play and an excellent individual performance from Logan with his bag of 4 goals.  The team now have 2 wins from 2 matches and a healthy goal difference of +10 goals.  The significance of the start to the season wasn’t lost on several of the top age players who explained they have already surpassed the last year’s season tally in the first two rounds of 2017.  What a difference 12 months and a healthy bench makes to a team.