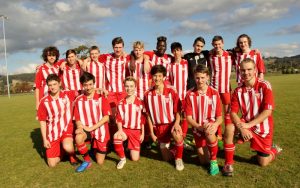 The TVFC Under 16 Boys team travelled to the lush playing surface of the Latrobe City Sports Stadium for its round 7 match against Falcons 2000.  The match was 3rd versus 4th and an important one for both teams as they battled for supremacy and outright third place on the LVSL ladder.

The Trafalgar boys started the game well, stringing together some good passes and maintaining possession in the middle of the park.  The backline held strong and worked well as a team stopping any advances made by the Falcon’s strikers.  Whilst the Victory strikers worked hard to create opportunities the Falcon’s backline proved challenging to navigate through.

The first 20 minutes of the match proved to be an arm wrestle and it was only a bullet from the boot of Michael Judd that put the Victory ahead.  A free kick was earned just outside of the box and Michael drilled it over the wall and into the top corner of the net.  Good work by Calum Stewart also, who joined the Falcon’s wall and ensured they could push across towards the ball.  Its little efforts like these that all add up to assist the free kicker.

For video of the free kick use the link: Trafalgar Victory FaceBook page

The goal was just the shot in the arm that the boys needed and to a man they rallied all over the park.  The midfield combination of Toby Budd, Kai Kondo and Michael Judd dominated the centre of the park.  They were strong, fast and skilful.  The boys defended grandly and generated considerable forward movement. Kai is improving on a weekly basis.  Whilst he hasn’t the experience of the rest of the team his tenacity, willingness to work and love of a contest makes him a very valuable member of our team.

With the midfield acting like a brick wall across the centre of the ground the TVFC strikers were receiving some quality scoring opportunities. In the 20th minute a lovely passing combination between Logan Winter and Jacob Holmes inside the box presented Logan with his 100th goal.  Logan, who had been awaiting this milestone for some time now, celebrated the event in style with the corner flag.  Well done Logan.

There were numerous Trafalgar players contribute towards the team’s success in the first half. Josh Porter was playing another grand game with both strength and skill, whilst Calum Stewart worked exceptionally hard to maintain possession and to crack the Falcon’s backline.  There was great linking between the lines and some delightful ball movement by the boys in red and white.

The Trafalgar team held out Falcons for the remainder of the half and went into the break 2-0 in front.

In the second half the Trafalgar lads continued a positive attack on the game.  However, it was evident that Falcons had lifted their play and were clearly up for the challenge. What unfolded in the second half was finals like and one could cut the air with a knife such was the pitch side atmosphere.

Somewhat against the trend of play Falcon’s made a lovely run along the right hand side of the pitch via a nice through ball, their striker went on to score Falcon’s first goal to make the score 2-1 Trafalgar’s way.  It was a disappointing result for the Trafalgar back four who defended well and had the Falcon’s striker in what appeared an off-side position.  The run was made right in front of the Trafalgar box where coach, marshall and linesman all adjudged the striker offside by a conservative 2 meters. Despite the lineman’s flag being raised, the central referee overruled to allow the goal.  You win some, you lose some.

Then 10 minutes later more controversy, when the same striker was awarded a penalty having been “felled” in the box.  From a Trafalgar perspective there wasn’t much in this decision.  However, when you chase from behind, make contact with the striker and he falls in the box, you haven’t got much of a defense.  The penalty was converted and the game was all tied up at 2-2 with falcons having all the momentum.

Te match see-sawed for the next 10 minutes or so. Changes were presented at both ends of the ground with falcons even hitting the cross bar at one time.  The defensive unit stood strong and keeper Joshua Rothmeier, who had an excellent match with the gloves, repelled any strikes on goal.

Just when the match looked headed for a draw the Trafalgar lads, who had battled manfully all match long, found a way to break the deadlock. Some great passing up the right hand side of the ground found Michael Judd confronted by a Falcons defensive wall just in front of their box.  Michael made a super pass over the defenders into the box where striker Logan Winter, who read the play perfectly, took one touch and finished calmly to win the match in the final minute.

The boys took home the three points, having fully deserved and earned the win.  The rendition of the team’s theme song rang loud and clear in the away change rooms.  The song was certainly snag loud enough for the Falcon boys next door to enjoy.