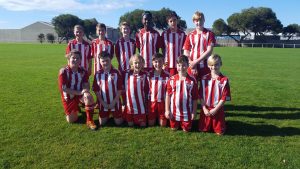 This is an amazing group of young players. It consists of 2 top age u14, 2 bottom age u14, 2 top age u12 and 6 bottom age u12. Two of these players have never played before. They have had a tough start with uncertainty of having a team. When we started the season we had nearly enough for two teams at training but now u12 and u14 have come together to get a team together; some weeks not even having a full team to play.

They have held their heads high every week training and playing hard. I am so proud of them going out on pitch learning the rules of the game as they go. Playing against players 3 or 4 years older than most of them and twice the size. The determination and sportsmanship these young players have is a credit to themselves and many could learn from them. The boys are improving and developing their skills as individuals and a team every week. Keep up the hard work boys