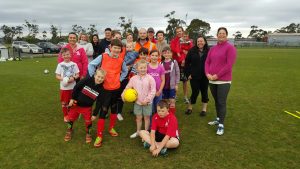 The first week of the TVFC “Summer Fun Kick” program has taken place and the 20+ participants thoroughly enjoyed the all aged, fun focused format.  Players of all ages and abilities took part in the new off-season initiative and event organisers are hoping that the program will only grow in the weeks to follow.

Fun Kick Co-ordinator Shirley Guthrie told TVF that “parents had been asking if the club would run an out of season activity/training program?” So at the end of the season a committee formed to consider the format of such a program.  Shirley explained that the main focus of the program was for players of all ages to have fun and enjoy the sport in a game like environment.

Miss Guthrie outlined that the objective of the program was to “keep current players interested in the sport over the off-season, as well as to engage and attract new players over the summer period.” She explained that the first week was a huge success as the committee organised for plenty of game leaders to cater for any number of players in attendance. The Summer Fun Kick model has the capacity to deliver a fun football experience for 10 or 50+ people. On our first week of the program we had Under 6s & Under 8s playing on one pitch whilst the under 10s and older played on a second pitch.

Shirley said that she “Wished to thank the TVFC community for helping to see her vision of this program and for being a part of it.  Without a community volunteer group, programs like this wouldn’t run.”  Shirley was very appreciative of the assistance offered by numerous people in taking on roles such as game leaders, meet and greet people and kitchen/BBQ staff etc. It was yet another example of how a sporting community can deliver a quality program to its members, with many people contributing.

It was great to see people enjoy the first week of the program.  Participants had a great kick, shared a BBQ and enjoyed each other’s company.  The planning committee are hopeful that the program will grow in the weeks to come.

One of the highlight’s of week 1 was the attendance of super keen first time soccer players at our great club. Shirley was delighted to present new player Piper with a ball to take home at the end of the session, as this week’s “Participant of the Week”.

A reminder that the TVFC “Summer Fun Kick” continues this Thursday the 9th of November at the Trafalgar Soccer Grounds from 6:00pm – 7:00pm.  A gold coin donation BBQ will also be available at the end of the program.  So come along and bring a friend.  It is indeed a case of the more the merrier!