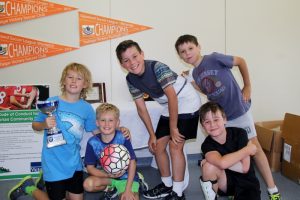 The season opening “Kick Start” event was held on Saturday the 18th of February at the Trafalgar Soccer Grounds.  The morning schedule was planned for junior aged players to come and enjoy a kick of soccer.  Registration information was also available on the day for those wishing to play at Trafalgar Victory for the 2017 season.

The event was well attended with upwards of 80 junior players coming along and enjoying the skills sessions and games.  The club also ran a BBQ and a raffle throughout the morning. It was great to see many returning players, yet equally exciting to see many potential new young players at the grounds.

A huge thanks to the many families who came and supported our junior “Kick Start” program.  The kids had a ball and our team numbers look very promising at this early stage in the season.  Thanks also to the team leaders who ran the sessions with the kids – great job team!

Soccer is a great sport for your kids.  The MiniRoos model, used for players from ages 5-10, provides a smaller dimensional pitch and few player numbers, ensuring that participants get maximum touched on the ball and heaps of opportunity to learn and improve decision making. As the kid’s progress form Under 6s to Under 8s and eventually Under 10s the pitches increase in size, player numbers per team increase and additional rules are introduced.  Whilst the junior competition is played upon a full sized pitch with the traditional 11 V 11 arrangement.

Trafalgar Victory FC is a great choice of club also with a real focus on family and participation.  It has a great group of volunteers and is ran by a very dedicated and enthusiastic committee.  So if you have a son or daughter aged 16 or younger and you would like them to be part of Australia’s most participated sport at an excellent club with superb grounds, then please get in contact with Trafalgar Victory FC via the club’s website at www.tvfc.com.au or email admin@tvfc.com.au

With the season not commencing until late March, there is still plenty of time to sign up for the 2017 season.  Information regarding online registration and training sessions are available via the club’s website.

Details regarding team entries etc. will be made available once registrations have been received.  However, the club hopes to field teams in all MiniRoos age groups (ie. Under 6/Under 8 & Under 10).  The club also hopes to field teams in Under 12/Under 14 and Under 16 for both boys and girl’s only teams.  Stay tuned for further details.