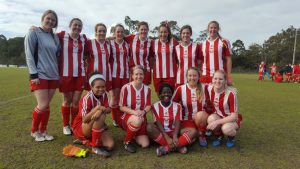 This game was shaping to be our biggest test so far this season against a very good team against who we have developed a habit of fielding an incomplete team which has resulted in some big losses over the last few years.

Sure enough we turned up with 10 players only.  However those 10 players were up for the challenge as we have shown progressively this season.  We matched the 2nd placed team in every aspect of the game but it showed that we were a player short because Traralgon’s passing game continually exploited the hole in our formation.  They broke through late in the first half to score in a very even half which showed us needing to tighten up in midfield where Traralgon was getting drive.

We did respond in the second half superbly, marking more closely in midfield, winning possession and pushing them back repeatedly.  We earned a penalty which was unfortunately saved but 5 minutes later we should have had another with Bridget brought down blatantly in the box but it was denied.  We pushed on relentlessly and Traralgon responded  to the pressure  by hacking and fouling behind the play which the young referee could not deal with.

We marked ourselves as serious contenders by matching what I believe is the best side in the competition.