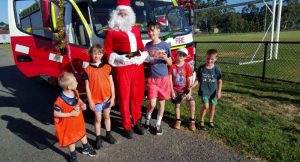 The boys and girls who attended last Thursday’s “Summer Fun Kick” session were treated to a guest appearance from none other than Santa himself!  The kids were happily playing football when the sounds of the local CFA truck could be heard in the distance.  It wasn’t long after that the flashing lights of the fire truck appeared entering the Trafalgar Victory grounds.  To the delight of the Fun Kick participants, the truck stopped and Santa jumped out of the passenger seat from the front of the truck.

Santa was warmly received by all present.  He made time to have a chat with the kids and to give each a lovely bag of lollies (or two).  Santa even took the time out of his hectic schedule to pose for a picture with the TVFC Fun Kick kids.  The CFA crew assisted Santa with his lolly hand out and looked set for a big night of surprises.

Trafalgar Victory would like to thank Santa for dropping in during his busy season.  TVFC would also like to thank the CFA for driving Santa to our soccer grounds.  Whilst she won’t admit it, Shirley Guthrie, may have made contact with Santa to make this visit occur.  On behalf of all the kids present we offer a big “Thank You” to Shirley!

All at TVFC trust that the MiniRoos and Juniors at our club are all on Santa’s “Nice” list and have a lovely Christmas. 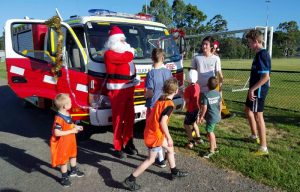