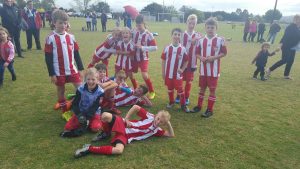 The Trafalgar Under 10’s Team 2 travelled to Morwell to play Moe on Saturday. Keeping in mind Thursdays training focus,  the team did a great job with some fantastic passes during the game. With regular subs all players were able to get a run in different positions. Including Charlie who started in goals then moved to mid field in the second half.  His efforts here earnt him this week’s Jump and Climb Award.

Elijah Played the second half in goals with some great saves. Jye received the BK Award this week for his consistent efforts on the field especially in defence. James scored our only goal with the final score being 3-1. All players did an awesome job