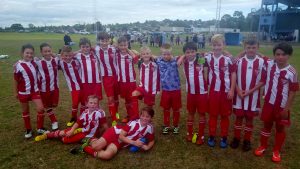 The Trafalgar Under 10s (team 2) played in Newborough against the Pegasus Team. The rain cleared up in time for a good warm up and an even better game! Our goal scorers were Elijah, James and Beau. Beau was solid in right midfield with his first goal for the season so he was awarded the Jump and Climb award. James B had a quiet first half as goalie but was very lively with several attempts at goal in the second half. He eventually scored after dribbling at full speed from the midfield line. Well done James, winner of the BK award for this week.
As my first game as co-coach, I was very proud of the excellent effort displayed by all players. The three in defence always read the play well and cut off the attack from the Pegasus attack with big kicks, there was lots of running in midfield and lots of shots at goal up front. GO Trafalgar 2 team!!!