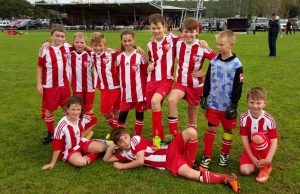 The Trafalgar under 10s (Team 1) travelled to Morwell to play Monash with the sun poking through just in time for the game. This weeks focus at training was passing and it was good to see everyone taking the opportunity to show what they learnt with the highlight being some quality play and passes throughout the game. The final score was 9-1, Trafalgar skipped out to a 5-0 lead by half time with some excellent hard earned goals, but while the goals were worth cheering for there were some excellent defence that never allowed Monash a real scoring opportunity.

At half time we moved the team around and all adapted well. Logan was awarded the Jump and climb award for this week with some excellent defence and passing in the first half and then a great goal in the second when he was moved up to striker. Zane Saltnes was the winner of the BK award in his first game in red and white with a good all round effort which included a quality long range goal in the first half.

Well done to the team, a fantastic effort and well deserved result!!