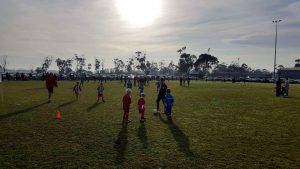 Trafalgar Victory FC hosted its first MiniRoos hub for the 2017 season on a glorious autumn morning.  The club was originally scheduled to host the even next weekend.  However, with the cancellation of Fortuna’s event at the last minute, Trafalgar Victory were required to “step up to the plate” at extremely short notice.

Despite only having two days in which to prepare the venue, design pitch layout, make canteen orders and arrange volunteers, the club marshaled its troops and pulled together to deliver on the day.  Any club who has hosted a MiniRoos hub event knows the amount of time required to get the day organised effectively.  So to accomplish this in only two days was remarkable. 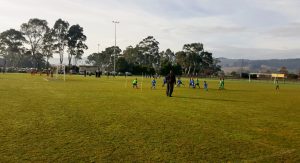 With in excess of 150 kids aged from 4-10 taking to the pitch, it is clear that the future of football (soccer) in the region is very healthy indeed.  The hub model used by the LVSL has its pros and cons, but it is a great mornings football and an awesome sight watching a double pitch facility covered with eager, energetic and happy soccer players. Given that all clubs support one another and that the opportunity to host such hub days is shared evenly, it would appear that the model works well.

There were many groups that assisted in the running of today’s event and Trafalgar Victory wishes to thank the following people: 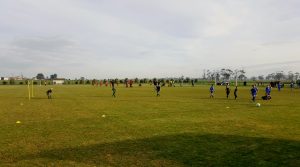 The feedback from participants and their families was very positive and much appreciated.  Whilst there are always areas for improvement, the overall feeling was that it was an extremely successful day.  One that was enjoyed by all present.  Even the simple fact that a car park is now available at the grounds was something appreciated by many and a great outcome for the club, its members and visitors.

Trafalgar Victory now eagerly await the opportunity to host another MiniRoos Hub some time later in the season.  Thanks to all who attended and supported the event and our club. 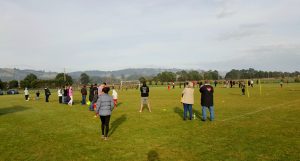