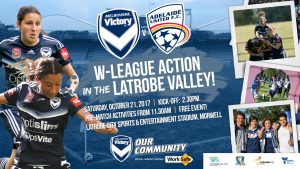 Melbourne Victory’s W-League are coming to Gippsland for a pre-season match against Adelaide United at the Latrobe City & Sports Entertainment Centre in Morwell.

Taking place on Saturday, October 21, it will be Victory’s last match before its 10th W-League season kicks off a week later against Canberra United at Epping Stadium.

TVFC members are encouraged to get behind this event and come along and watch the best women’s football offered in the country. With free entry you cannot go wrong.  The entire Gippsland football community want more games like these in our region. So have a day out and come and watch the Melbourne Victory W-League team.