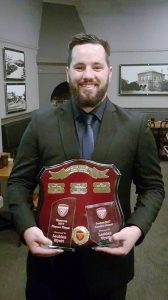 Lachlan Wyatt was announced as this year’s Luke Barker Memorial Senior Club Person of the Year at this season’s Senior Presentation held earlier this month.

Lachlan was an extremely popular winner of this year’s award and a most worthy recipient.   He has been a member of the TVFC Committee for many years now and this year stepped up as the club President, following the early season departure of Emma Hudson.

Lachlan has represented TVFC upon numerous committees including the LVSL delegates and the Trafalgar Recreation Precinct Committee.  He regularly meets with Baw Baw Shire to present the needs of the club. Lachlan has also worked hard to establish the new carpark and is constantly in discussions with local groups regarding the planning/construction of new change room facilities.

Behind the scenes it is Lachy who has marked the grounds for the entire season.  He has played as goal keeper for both the men’s reserves and seniors, meaning he has played two entire matches for the men every round this season. Lachlan also is a regular supporter and attendee at home junior matches and is very supportive of junior players and coaches alike.

All at Trafalgar Victory would like to congratulate Lachlan upon an amazing season’s contribution.  We are extremely grateful for the many contributions he has made to our club.