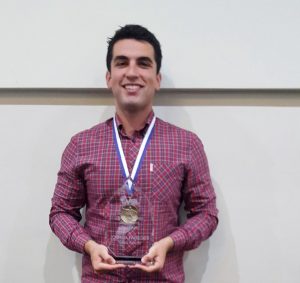 Trafalgar Victory striker, Joshua Paredes, has won the LVSL Senior Men’s Best & Fairest.  Joshua won the title by 1 votes and is the first TVFC player to win a  league B&F. Those associate with the TVFC Senior Men’s team were not surprised by the announcement which was made at Friday night’s LVSL Senior Presentation.  Joshua is an extremely talented player who reads the play superbly and has amazing strength on the ball. He is deadly in front of goal and most importantly an excellent role model for the many young players at the club.

Joshua was extremely modest when presented with the Dick Bosma Senior Men’s Best and Fairest trophy.  The announcement was well received by all in attendance, but no more so than by the TVFC members present at the league presentation.  All at Trafalgar Victory are delighted by Joshua’s award. Congratulations Joshua upon an amazing season and upon being announced the league’s Best & Fairest player.