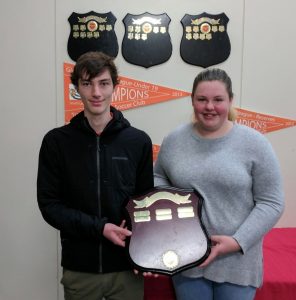 This year’s Angelo Carpinteri Junior Club Person Award nominees were Chloe Alison and Monty Coots.  Both junior aged club members have made an exceptional and unique contribution to Trafalgar Victory FC over the 2017 season.

Chloe, at the age of only 14, has this year coached the Under 14 Girls team for the second half of the season.   An amazing effort for a young lady who had to stop playing due to a serious knee injury earlier in the season.  In addition to her excellent coaching, Chloe has had to manage the process of her team being merged with another club to form a co-team for the majority of her tenure as coach.

Monty, in addition to his Year 12 studies, has played the entire season as a member of the TVFC Reserves team. He has both manned the gate and ran the canteen on numerous occasions. Monty has also assisted in the running of several junior training sessions and is the first to assist coaches in any role asked of him.

The club is extremely grateful for the efforts of all its dedicated volunteers.  However, it is especially appreciative of the efforts made by its younger members.  It is people like Chloe and Monty that the future of our great club is built upon.

The voting for the award was tight.  However, Monty Coots was today announced the 2017 TVFC Angelo Carpinteri Junior Club Person of the Year for season 2017.  All at Trafalgar Victory thank both Chloe and Monty for their contributions over the season.  Congratulations to Monty for winning this season’s award.